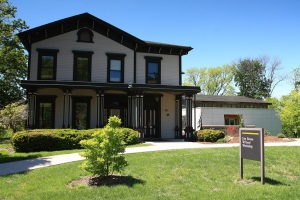 Someone recently asked me to write about the “inner workings” of the Iowa Writers’ Workshop and the summer program in particular. As I recently wrote an acquittal report for the funding I received from the Copyright Agency Limited (www.copyright.com.au) to attend the special 3-week May session in fiction at Iowa, I thought it might be of interest to others thinking of applying for this course in the future. What I’ve written is fairly dry, but I have gone in to some detail about what goes down during class. I hope it’s of some help:

Structure of the course: There were 10 students in the course, and during the three weeks we met as a group with our teacher twice a week (on Tuesdays and Thursdays, from 2pm to 5pm). Our first group session was a general introduction session, but in the following five sessions we workshopped students’ stories. At each session we workshopped two students’ stories (up to 35 pages or 10,000 words each), meaning that each student only workshopped once over the three weeks, for a little more than an hour each (about 1 hour 10 min). The student handed out copies of their story in the session that preceded their scheduled workshop, and in that time we were required to read each story at least twice, then write a page of comments to give to the student. (I was happy with the feedback I received on the 8,300-word novel extract I workshopped—although I would have liked more detail in some cases, overall I thought everyone’s observations were quite astute.) Each week, the teacher also handed out essays about the writing process that we then spent discussing for 20-30 minutes in the following class.

My favourite part of the course was the round-table discussions we had when workshopping students’ stories. Although I have since learned it is par for the course for creative writing workshops in the United States, it was the first time I had been in a creative writing group where the author has been a “fly on the wall” while others are analysing his or her story. (My experience at creative writing courses in Australia has been that participants direct questions at the author while discussing his or her story.) During the one hour in which we dissected each story, the author was not allowed to say or ask anything. This is an effective mode of operation as class participants are less likely to verbally censor themselves and more likely to enter into a deep discussion about the story’s themes. At the end of the hour, the author had about 10 minutes to ask specific questions.

My fellow students: One of the most rewarding aspects of attending the course was finding a like-minded group of writing peers. The 10 students in this year’s course were an impressive and diverse group of people, including: a New York Times journalist who was awarded the Pulitzer Prize for Investigative Reporting in 2008 for investigations done in China; a New Zealander currently teaching at a university in Oman; a Vietnamese-American completing his PhD in English literature; a former Beijing journalist who immigrated to the United States 15 years earlier; a retired engineer; and a current student of the Master of Fine Arts (creative writing) course at the Iowa Writers’ Workshop.

The fact that Lan Samantha Chang was teaching this year’s Special May Summer fiction session was a huge drawcard for me, as she has written a historical fiction novel (Inheritance, 2004) loosely based on her family’s experience, and she is also well placed to advise about publishing opportunities, fellowships and further training in the US.

During the workshop sessions, Lan Samantha Chang was adept at leading the class into deep discussion about each student’s story. Although she was incredibly busy organising the Iowa Writers’ Workshop 75th Anniversary Reunion (to mark the 75th year since the start of the Workshop) on June 9 to 12, 2011 http://iww75th.uiowa.edu/reunion.html, Samantha Chang put aside time to meet each student in our course for a one-hour one-on-one session to discuss any problems or queries we had. During my meeting with her, we brainstormed possible plot ideas for my novel together. I also inquired about the value of me applying for the Iowa Writer’s Workshop Master of Fine Arts degree in the future (after completing my doctorate at UTS). She said if I had published a book there would be no point in applying for the MFA at Iowa, adding that she thinks I will be able to publish my novel in a few years’ time.

Iowa Writers' Workshop Special May Session in Fiction class of 2011

Being part of a tradition: The Iowa Writers’ Workshop is the oldest creative writing course in the United States (it was established in 1936, although “verse-making” was taught at the University of Iowa as early as 1897) and possibly the oldest in the world. Because of the Workshop’s long history, during my three weeks studying at the Workshop I was buoyed by the knowledge that I was part of a creative writing tradition. I spent hours perusing the bookcase in the Glenn Schaeffer library that contains all 3,500 published books by former students of the course, included those written by esteemed alumni such as Tennessee Williams, Raymond Carver, John Cheever and Michael Cunningham.

I was also able to use the University of Iowa library facilities and borrowed Master of Fine Arts theses written by previous students, including Paul Harding (2010 Pulitzer Prize winner), Robert Olen Butler (1993 Pulitzer Prize winner), Jane Smiley (1991 Pulitzer Prize winner), Australian author Nam Le (2010 PEN/Malamud Award winner) and John Irving (author of The World According to Garp and The Cider House Rules). The most impressive was Flannery O’Connor’s thesis, which she wrote in 1947 at the age of 22. O’Connor is widely regarded as one of America’s best short-story writers, and when I read the stories she wrote for her Masters thesis at Iowa I was astonished by the complexity and maturity of her voice, and the difficult themes (such as racial discrimination) she chose to tackle at such a young age. At 22, she had the voice of a much more mature, experienced writer—and this realisation both inspired and daunted me.

Literary tradition in Iowa City: Although I was slightly apprehensive about staying in what I thought would be a small Midwestern town, I was pleasantly surprised to discover Iowa City is a fairly cosmopolitan city of 70,000 residents with a vibrant literature and arts culture. It’s the sort of place where people read Penguin classics in the park and have The Wall Street Journal delivered to their homes. Iowa City is also one of four UNESCO “Cities of Literature” worldwide (the others are Edinburgh, Melbourne and Dublin), meaning literature, drama and/or poetry play an important role in the city (http://cityofliteratureusa.org). When I wasn’t in class, I attended readings at the famous Prairie Lights bookstore (www.prairielights.com), which opened 1978, and perused the shelves of the three second-hand bookstores located downtown.

Activities outside class time: As 70 per cent of the students in my course did not come from Iowa City or nearby, we spent a lot of time in each other’s company and continued the workshopping process outside of class. We also spent time at the grungy Fox Head Tavern, known as the favourite haunt of Writers’ Workshop students and teachers.

Negative experiences: It is difficult for me to name negative experiences that arose from my attendance at this course, but if any it is related to the inadequacy of information given to me before the start of the course. Despite calling the university a month before my arrival, I still encountered difficulty trying to discover information such as the cost of the course, the exact day the course would begin and end (I only discovered this after arriving in Iowa) and how many face-to-face hours the course involved—I was transferred to four different sections of the university during my phone call but was still unable to have all my questions answered.

I gratefully acknowledge the funding I received from the Copyright Agency Limited (www.copyright.com.au) that allowed me to attend the Iowa Writer’s Workshop Graduate Summer Program Special May Session in Fiction.

www.christinepiper.com I’m a mixed-race Japanese-Australian writer and editor. My debut novel, After Darkness, won the 2014 The Australian/Vogel's Literary Award and was shortlisted for the Miles Franklin Literary Award. It's about Japanese civilian internment in Australia (see: lovedayproject.com) and Japan's biological warfare program. My articles, reviews and short stories have been published in various newspapers, magazines, journals and anthologies.
View all posts by C Piper »
« Doctor of Creative Arts candidate selected to attend Iowa Writers’ Workshop
The Artist’s Way and all that jazz »

2 thoughts on “Inside the Iowa Writers’ Workshop summer fiction course”