This is an old article, but one that I’ve been meaning to write a post about for some time—and I thought today’s Leap Day was as good a time as ever:
Jumpology: The Theory of Jumping Shots

The New York Times article is about ’40s and ’50s fashion and portrait photographer Philippe Halsman, who photographed the likes of Marilyn Monroe, Audrey Hepburn, Salvador Dali and Albert Einstein. He was famous for his philosophy of jump photography—which he called “jumpology”—in which he asked his subjects to jump and captured them while airborne.

Halsman, who died in 1979, said, “When you ask a person to jump, his attention is mostly directed toward the act of jumping, and the mask falls, so that the real person appears.” 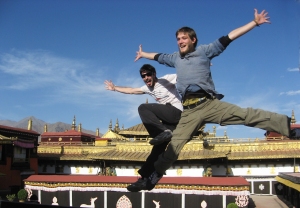 Although I would like to say that a well-considered philosophy was behind our decision to take jumping shots, the truth is much more prosaic: while on an overland tour between Kathmandu and Lhasa in 2007, two young Danish girls in our group inspired us to start doing them. At first, I didn’t like doing them—they took a lot of effort, and seemed gimmicky. But seeing the photos made me change my mind: not only did the jumping pose make aesthetically striking images, but the subjects’ facial expressions were eye-catching, too. Joy, surprise, determination and ecstasy were writ large in varying degrees upon each person’s face. And the fact that it is difficult to look miserable while jumping added to the photos’ appeal.

Me jumping in front of Machu Picchu, at the end of the Inca Trail

As we took more photos, it became clear that each person has their own unique way of jumping, their own unique style and facial expression that they repeat unselfconsciously time and time again. Mine is a sort of knees backwards, floppy starfish pose coupled with an expression of absolute glee. And so it seems there’s truth in Halsman’s theory that in the act of jumping “the real person appears”—a glimpse of one’s true self.

And so began a tradition of taking jumping shots in every destination we have travelled to—and we have been many places since: 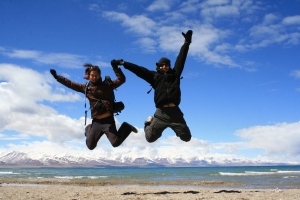 Me and Kris in front of Lake Namtso, Tibet 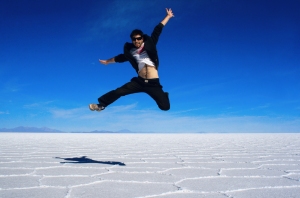 Kris and I in Vermont

June and I in Coney Island

Tiff and Paul in Times Square

Me in front of Jenny Lake, Grand Teton National Park

Me and Kris in front of Uluru

www.christinepiper.com I’m a mixed-race Japanese-Australian writer and editor. My debut novel, After Darkness, won the 2014 The Australian/Vogel's Literary Award and was shortlisted for the Miles Franklin Literary Award. It's about Japanese civilian internment in Australia (see: lovedayproject.com) and Japan's biological warfare program. My articles, reviews and short stories have been published in various newspapers, magazines, journals and anthologies.
View all posts by C Piper »
« The Artist’s Way and all that jazz
Stranded: the evolution of a story »

2 thoughts on “A giant leap”